The Landforce disc plough is the perfect tool when ploughing uneven fields that has buried large roots and other obstructions, One can obtain outstanding penetration performance. Spring loaded floating rear furrow wheel control the side draft to ensure straight working and smooth movement of implement. The disc can be adjusted in three stages according to the soil conditions by means of position and direction angle. Due to rotational movement of the disc, the tractor tows the machine easily & enables fuel saving. Features Disc plough have 2,3 & 4 bottoms disc according to different soil conditions and HP. Tractor is directly attached to Three Point Cat II - linkage. With its robust design having heavy duty pipe frame & hard wearing disc blades allows the plough to operate under heavy crop residue. Benefits A disc plough can be forced to penetrate into the soil which is too hard and dry ,thus results in soil breaking, turning & mixing. It is more useful for deep ploughing A disc plough works well even after a considerable part of the disc is worn off in abrasive soil. It can used safely in stony and stumpy soil without much danger of breakage, new fields can be easily open with this.

Send your enquiry to this supplier 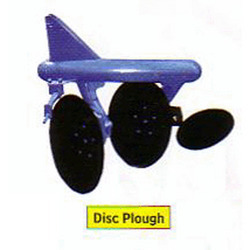 kisan24.com is India's largest online agriculture portal that assists manufacturers, suppliers & exporters to trade with each other at a reliable & transparent platform....